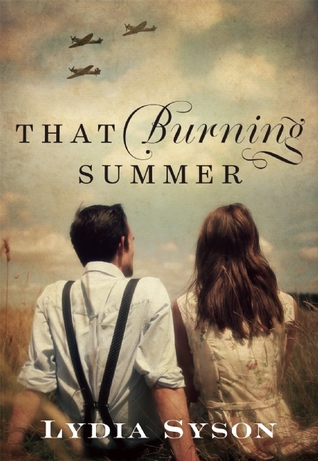 It’s July 1940 on the south coast of England. A plane crash-lands in the marsh, and sixteen-year-old Peggy finds its broken pilot—a young Polish airman named Henryk. Afraid and unwilling to return to the fight, Henryk needs a place to hide, and Peggy helps him find his way to a remote, abandoned church.

Meanwhile, Peggy’s eleven-year-old brother Ernest is doing his best to try to understand the war happening around him. He’s reading all the pamphlets—he knows all the rules, he knows exactly what to do in every situation. He’s prepared, but not for Peggy’s hidden pilot.

Told in alternating points of view, this is a beautifully written story about growing up in wartime and finding the difference between following the rules and following your heart.

I’m going to come right out and say it: I struggled immensely with this book. I couldn’t get into it, though the premise sounded promising. I didn’t believe the characters. I didn’t understand motivations. There was no character development. That Burning Summer sounded like a good idea, and it started off in the right direction, but it soon fell downhill into a cesspit of its own making.

In all honesty, That Burning Summer would have benefited from more focus on character development. The characters were sorely lacking, and due to the lack of an actual plot as well, characters should have been a primary focus. Without either available for something to grasp onto while reading, reading the book became a chore and decidedly more uneventful and disillusioned as the pages dragged by. Peggy and Henryk’s interactions were, by far, the most intriguing part of the story. Alone, Peggy’s point of view was the best. However, when we got the snippets of her and Henryk together it shot the narrative over the moon and into the realm of a good story. The downfall comes from the sheer smallness of their interactions. We got to see Peggy and Henryk together maybe once every five chapters (and those five chapters were no excitement.)

That Burning Summer tries to tackle three character POV’s, and it failed on epic proportions. Peggy was the most developed, but even then she was sorely lacking. This book could have done without Henryk and Ernest’s narratives all together. Henryk might have been more passable with a bit more effort and attention to detail, but Ernest? He added nothing to the story and therefore shouldn’t have been a part of the story. At its core, That Burning Summer was attempting to be a forbidden romance between Henryk and Peggy – however, add in Ernest (Peggy’s rule abiding little brother) as a POV and it becomes a mish-mash of narrative with no cohesive qualities. Ernest would have been fine as a character in the story itself, but his narration added nothing but annoyance overall.

Besides the characters, this book suffers from waiting for something to happen. I get that the waiting was what was actually going on at the time, but there is no tension to that waiting – which would have made it more bearable to read. What we, as readers, are left with is nothing more than day to day activities with the occasional interaction between Peggy and Henryk to add some sort of excitement. These interactions are too few and far between when compared with the rest of the book’s core, and that’s a problem. I realize I’m repeating myself, again, but it was the core issue and it spirals out into all corners of the story.

In addition, the writing was vague. It felt as if it were trying too hard to be flowering and lyrical, but it ended up eliminating the intimacy required to connect with characters and their motivations – not to mention the story itself. Sentences and phrases such as:

“I am a falcon. A peregrine, a traveler. Yet godlike. Alone in an azure abstraction. Air purer than danger.”

The writing didn’t lend itself to the subject matter or the content of the story itself. Sometimes, less is more – simple as that.

That Burning Summer would benefit from a good burning and reconstruction. A lot could be scrapped, not much could be salvaged. The one redeeming quality still needs a lot of work. I’m sorry to say I will not be recommending this book or purchasing it any time soon. I suggest you do the same.