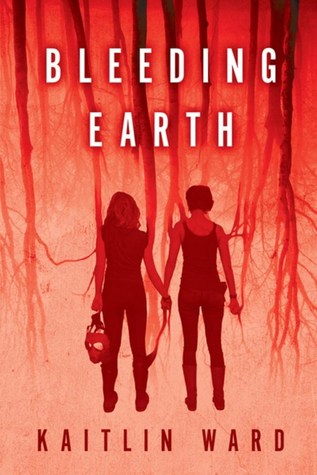 “The earth isn’t trying to kill us; it’s trying to unite us.”

Lea wants to ignore the blood. She wants to spend time with her new girlfriend, Aracely, in public, if only Aracely wasn’t so afraid of her father. Lea wants to be a regular teen again, but the blood has made her a prisoner in her own home. Fear for her social life turns into fear for her sanity, and Lea must save herself and Aracely whatever way she can.

Well, that was surprising. I didn’t like it. Nuh uh, no way, and see ya later. I mean, honestly? I expected so much more out of this and then I started it and it was meh, and then bleh. If you cannot tell, I literally cannot force words out of me that do not exist. This book was awful, genuinely, horribly awful and now I feel like a despicable human being for saying so on the internet.

IS IT IMPOSSIBLE TO BE ORIGINAL ANYMORE! Jeesh. I swear, all the books these days – well, all apocalyptic books – seem to just be recycled versions of the exact same thing over, and over again. I will say, Bleeding Earth sounded interesting – the whole idea of Earth spewing blood sounded nasty and amazing, and then I read it and it destroyed all of my hope in humanity (exaggeration, but you get the picture).

The characters… ugh, they make me shudder. They were the perfect example of what happens when idiots take over. I have never read a book with such a lack of common sense, ingenuity, or simple intelligence in my life. Lea, Lea, Lea. Childish fool – I swear, I wanted to strange her with a cotton candy jump rope or something equally ridiculous that she would dive right into without a second thought – she’s that stupid. Not only that, but you add sheer idiocy with a “holier than thou” attitude and you get the most moronic, dependent, and ridiculous protagonist in existence. She makes Bella Swan look like freaken Katniss Everdeen warrior queen.

I cannot find the words to describe how much I loathe what I just forced myself to read. Truthfully, I think this was better off left in the slush pile and I cannot believe I just wasted my time on something so ridiculous. Everything was poorly handled. The blood, the sheer inconsistency of what was going on: schools and work places were supposed to be shut down but mom went to work for the entire book, changes in what the blood could or couldn’t do when it was convenient like how it was too thick and overwhelming to walk in and yet later people are running through it like it’s a cloud. There was just so much that I wanted to stamp with a giant NO. Partying while the world is ending and daring people to drink the blood that is destroying the Earth: NO.  Previously stagnant blood conveniently flooding a car engine and then disappearing when the protagonist had to get out: NO. Skipping school just to watch news: what the hell? Needy protagonist who doesn’t care about anything but herself: NO. Just, no, no, no, no. Get the picture?

Overall, Bleeding Earth was the epitome of disappointment. I want to wash my brain with bleach, stick needles in my eyes, and possibly go so far as to get a lobotomy just so I can forget the monstrosity that I recently witnessed. This book was so juvenile, pointless, and ridiculous that it could probably win the Darwin Awards without even trying. Good riddance.

One thought on “Bleeding Earth”