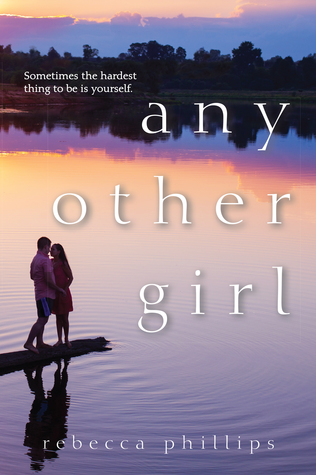 Title: Any Other Girl

After a disastrous, reputation-destroying party at the end of junior year, Kat Henley has a new plan. When it comes to boys–especially other people’s boys:

In the past, drawing attention to herself helped distract people from what really makes Kat different–having two gay parents. But it’s also cost her friendships. Kat can’t afford to lose any more of those, especially not her cousin, Harper. They’re spending one last summer together at the lake, where they run into an intriguing newcomer named Emmett Reese. After years of trying to prove she’s just like everybody else, Kat has found someone who wants her because she’s not. A boy who could be everything she wants too–if Harper hadn’t liked him first. . .

I have never read any of Rebecca Phillips work before, but boy, am I glad that I have finally had the honors of getting my hands on one of her books. I’ve heard of Faking Perfect, but I’ve never had the chance to pick it up. Trust me when I say this: I am going to religiously hunt down a copy ASAP.

Any Other Girl is a provocative, fast-paced contemporary romance that will force you to think about accepting your true self in the face of issues relevant to every day discussions. With same-sex parents, slut shaming, assumed betrayal, and all sorts of other shenanigans – this was one hell of a book to blow through during the weekend.

Kat Henley. Friendly. Flirtatious. Sure of herself. Homewrecker? Kat is an amazing narrator who goes through some pretty shitty things. OH NO! She’s so nice she must be flirting! You guys know what they say about when you assume something, right? You know, ass-u-me. You make an ass of yourself and the person you assumed something about. Kat is having a nice, friendly conversation with her best friend’s boyfriend when this baby kicks off. And, low and behold – Shay, aforementioned best friend, ends their two-year long friendship and accuses Kat of flirting with him… quite vocally. Needless to say, all of Kat’s friends are also Shay’s friends and typical to young adult novels all of the friends side with the person in the wrong: AKA Shay. Kat eagerly escapes at the end of the school year, grateful for the chance to get away before her cousin leaves for college. She meets Emmet (love the name, by the way) and the two of them hit it off despite the fact that Harper, Kat’s cousin, basically called dibs. Ta da….

I loved Kat. I really did. I can honestly tell you that I am nothing like her – so reading about someone so undoubtedly confident was sort of nice. She’s outgoing, a girly girl, and outspoken – only one of which I identify with. She was loyal to her family, headstrong in the ways that mattered, and all sorts of fun to read about. I really loved her relationships. What I thought was going to be a story about a fluffy love triangle (I hardcore ship love triangles that are two girls and one guy, by the way) ended up being so much more. Kat takes no shit, and neither does the subject matter of this book. Phillips handles it just as gracefully as her characters – which is part of what made me love this book so damn much.

Another bright spot in this book were the relationships, as I’ve sort of mentioned above. Kat and Harper, Kat and Emmet, basically Kat and everybody. Kat and Harper’s friendship/familyship was the biggest highlight for me. The way the two of them are together reminded me so much of how I am with my cousin, and it warmed my heart in such a way that makes it almost impossible for words to describe. Word of advice: Don’t keep secrets from family. It never ends well. But, things went down hill and then climbed steadily back up. To me, that says more about their relationship than any amount of meaningless exposition ever could. The ability to forgive each other for doing stupid, teenage things was beautiful to witness. Then we have Kat and Emmet… ugh… swoon. I mean, it was perfectly paced. A slow burning, gaining speed over time romance is the best romance in my opinion. They truly knew each other. They were best friends and then it turned into a little something more. Like I said, beautiful.

Overall, Any Other Girl is an enjoyable romance that avoids all of the usual tropes that make me shudder in my fluffy pj pants. With dynamic and diverse characters, a set of fathers that made me squeal with laughter, and an amazingly fleshed out plot line – this book has made a name for itself and for its author. If this book is any indication, Rebecca Phillips is one to watch out for.

5 thoughts on “Any Other Girl”