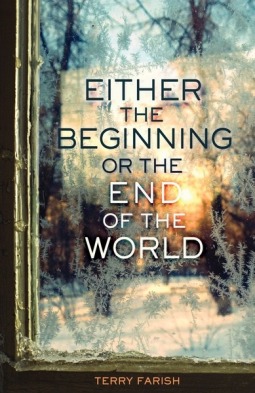 “We are dangerous. We have warned each other about this. Part of him is stillborn too.”

Title: Either the Beginning or the End of the World

For sixteen years, it’s been just Sofie and her father, living on the New Hampshire coast. Her Cambodian immigrant mother has floated in and out of her life, leaving Sofie with a fierce bitterness toward her and a longing she wishes she could outgrow.

To me she is as unreliable as the wind.

Then she meets Luke, an army medic back from Afghanistan, and the pull between them is as strong as the current of the rushing Piscataqua River. But Luke is still plagued by the trauma of war, as if he’s lost with the ghosts in his past. Sofie’s dad orders her to stay away; it may be the first time she has ever disobeyed him.

A ghost can’t love you.

When Sofie is forced to stay with her mother and grandmother while her dad’s away, she is confronted with their memories of the ruthless Khmer Rouge, a war-torn countryside, and deeds of heartbreaking human devotion.

As Sofie and Luke navigate a forbidden landscape, they discover they both have their secrets, their scars, their wars. Together, they are dangerous. Together, they’ll discover what extraordinary acts love can demand.

Well, that sucks. Okay, so, as you all know – I hate giving bad reviews. I hate it, hate it, hate it. And when it comes to this book, I really don’t want to give it a bad review. It had some serious potential, and everyone else seems to love it – I just couldn’t get into it. The writing was off, the pacing was off, the characters were off – everything was just off. Nothing worked for me, and it sucks. I gave up on this a couple of times while reading it before I could force myself to finish it. Goodness, even my school work was more appealing – and I’m about to start Fall Break! (AKA: no real school work).

Either the Beginning or the End of the World is a drama illustrated in prose more suited to being lyrical verse. It is the story of a sixteen year old girl named Sofie who is fighting to continue in her hating of her estranged mother. It is also the story of Luke, a soldier who is battling PTSD after his tour through Afghanistan.

I really wanted to like this book, especially because Luke and his PTSD play such a huge role – I just struggled to get into the language and I couldn’t identify with any of the characters. All of them were so detached and strange, and not in a good way. The characters were quirky in such a way that made them unappealing. Sometimes, even the evil or unlikable characters have some sort of appeal to keep the reader intrigued – but in this case, not even the protagonists had enough of anything to keep my attention.

I’m sure this book will find its fans somewhere, and I can see that it already has with a few other readers, but as for me – I am not one of those fans and I probably never will be. What could have been a wonderful story about overcoming PTSD and hatred turned out to be a sparsely written, stretched out poem needing a lot more work to make it worth reading. I hate to say it, but I would not recommend this to anyone – not even if it were the last book on earth.