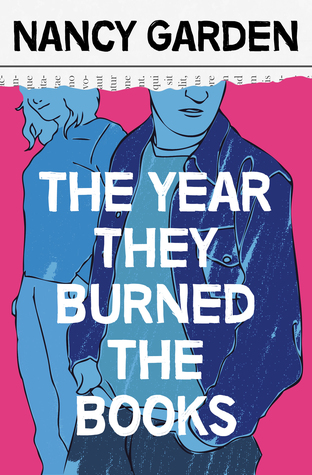 This books most powerful scene, and most powerful element entirely, was the burning of the books. I had to put the book down and just go “wow.” It was hard to read, hard to digest, and even harder to accept – especially when examining the horrible reasons behind it. They burn these books because they’ve been deemed immoral. You know what was immoral? Sex ed. That’s right. Sounds crazy… but it’s really not. Do you know how many YA books have been banned on grounds of sexual content? Some Girls Are (this one was last year) , the Perks of Being a Wallflower, Go Ask Alice, Forever by Judy Blume, Looking for Alaska, and Thirteen Reasons Why are just some of the few that have been banned in the recent years for being “gateways to sexual activity.” So, no, the concept of The Year They Burned the Books really isn’t that far out there.

Overall, The Year They Burned the Books ultimately benefits from its focus on issue rather than character. It is plot based, action driven, and based in the consequences rather than the emotional journey of the characters. It focuses on the themes and complications instead of trying to make us emotionally invested in the characters, which works in its favor because we do end up caring quite a bit. Reading this book is like eating a bar of chocolate when you have the beginnings of a cavity. You take a bite, it’s sweet on your tongue and you go in for another… but then it hits that nerve, and you realize you’ve had a cavity all along. Censorship is that cavity, and damn I wish we could pull it out at the root and get it over with. This book is about fifteen years old now, yet it is still very, very relevant.