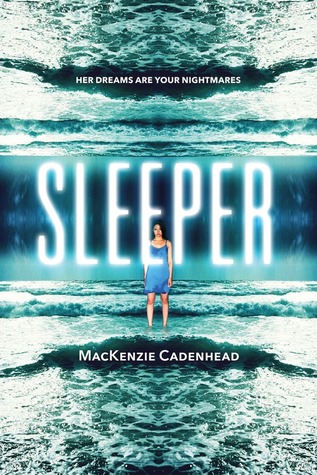 As if surviving high school wasn’t hard enough, Sarah Reyes suffers from REM Sleep Behavior Disorder, a parasomnia that causes her to physically act out her dreams. When she almost snaps her friend’s neck at a sleepover, Sarah and her nocturnal habits are thrust into the spotlight and she becomes a social pariah, complete with public humiliation.

When an experimental drug comes onto the market that promises nighttime normalcy, Sarah agrees to participate in the trial. At first, she seems to be cured. Then the side effects kick in. Why does a guy from her nightmare show up at school? Are the eerily similar dreams she’s sharing with her classmates’ coincidence or of her making? Is she losing her mind or does this drug offer way more than sleep?

I had a hard time with this book because I still can’t quite figure out how I feel about the whole thing. Sleeper, while it had an interesting premise, fell flat on the delivery. I kept reading because of my sometimes ridiculous need to finish things even if I don’t like them – simply to find out what happens at the end. While the book is chilling, suspenseful, and entertaining in the long run, I couldn’t connect to the characters. Despite all of this, though, my biggest issue and the absolute reason that I will never recommend this book, is it’s problematic representation of sexual assault.

There are two instances of sexual assault in this book, one where the main protagonist is the victim and another where some main characters in the book assault another character while under the control of drugs. Both instances occur while under the influence of the test drug Dexid, but then the assault is never mentioned again. The characters brush it off, and the whole thing is swept under the rug save for a few horrifying comments by another character named Josh (the guy who assaults Sarah while she is paralyzed) that the sleepers are basically zombies you can do anything to and they won’t care. No mention of anything after that. There is no healing, no consequences, and no inkling that anything ever even happened to the character.

This book is the epitome of sexual assault as a plot device and plot filler, and it, for lack of a better word, is horrifying.

Now, beyond that, I think Sleeper could have been great. The violation of invading someone’s body while they sleep was metaphor enough, but the literal “representation” of sexual assault that was then passed over in order to move the plot along has completely ruined this book for me. Perhaps if there had been additional commentary on the assaults committed, even an admission that they had actually happened – I might have felt differently. This book had such a great opportunity to highlight power imbalances and what it’s like to be taken advantage of when vulnerable.  This book had a great opportunity to scrutinize what counts as an assault and why, what consent is, and how taking advantage of someone while they are unable to respond is still assault. This book could have been a powerful narrative, and perhaps that is what it tried to be. Instead, though, we were given victim erasure and a complete lack of any sort of feeling in regards to the attacks that took place in the book.