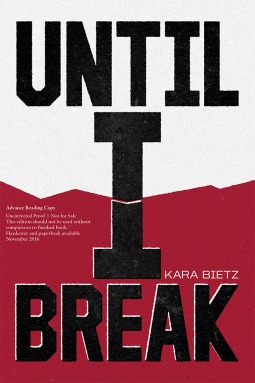 Title: Until I Break

Two boys: One is a star athlete and top student with a deep-seated need to prove himself. The other is a chip-on-his-shoulder quarterback who will never settle for second best. When gunshots echo through the halls of Broadmeadow High School, whose finger is on the trigger? This unforgettable novel counts down the twelve months leading up to an explosive moment. A year before the shooting, Sam North has a bright future as well as a problem that nobody else seems to see Ace Quinn, his neighbor and teammate. For years, Ace has been bullying and harassing Sam, yet he’s managed to deftly conceal his actions and threats from the rest of the world. As Ace’s secret rage intensifies, Sam becomes more desperate to stop him. But how far will he go? And what if Ace takes his threats even farther?

I don’t really know what to say. All in all, it wasn’t my favorite – but it wasn’t awful. It was just sort of meh and I got dragged along for the ride. I didn’t want to put it down in the hopes it would get better, but it never did. It almost sort of got worse? If that’s even an accurate measurement. It wasn’t horrible, it wasn’t good, it was just there, Kind of a waste of time, in the long run.