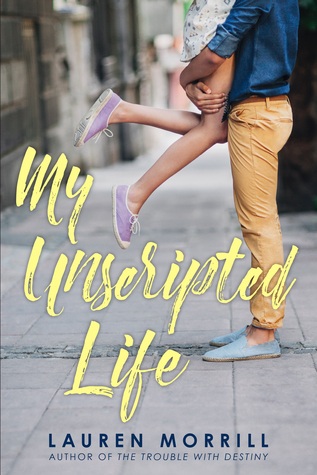 I may not have a best friend, and my future may still be in question, but I may have just solved the summer-plans problem.

Another sultry Georgia summer is about to get a lot hotter. Dee Wilkie is still licking her wounds after getting rejected by the precollege fine arts program of her dreams. But if she’d gone away, she wouldn’t have been around to say yes to an unbelievable opportunity: working on the set of a movie filming in her small Southern town that just happens to be starring Milo Ritter, the famous pop star Dee (along with the rest of the world) has had a crush since eighth grade.

It’s not like Dee will be sharing any screen time with Milo—she’s just a lowly PA. And Milo is so disappointingly rude that Dee is eager to stay far away from him. Except after a few chance meetings, she begins to wonder if just maybe there’s a reason for his offensive attitude, and if there’s more to Milo than his good looks and above-it-all Hollywood pedigree. Can a relationship with a guy like Milo ever work out for a girl like Dee? Never say never.

My Unscripted Life was adorable, fluffy, goodness. Honestly. If you are looking for a cute contemporary to fill your soul with rainbows, this is definitely it. While, like every novel, it has its ups and downs, the overall experience of reading My Unscripted Life is one of pure enjoyment.

This book is one of those books that gets by on pure suspension of disbelief, not that it’s a bad thing. But, if you think about it realistically (and not that I actually know anything about the behind the scenes of film-making), but none of this is ever likely to happen. A producer offering you a job when he randomly stops for directions? Yea, not realistic. BUT! My Unscripted Life makes up for the complete disregard of plausibility in its amazing attention to detail and characters. I mean, even though I know next to nothing about any of the movie falderall, I walked away from this book believing that it had actually happened.

The characters were the highlight of the book, and the setting. The characters and the setting together made for a wondrous experience.  I wish there had been more of Naz, Dee’s best friend, because she was an awesome and hilarious reality check that the book desperately needed at certain moments. Speaking of Dee, for a narrator, she was pretty chill. Yeah, yeah, yeah, I know I could probably pick a better word than “chill”, but deal with it. Dee, at the start of the novel, is kind of just rolling over and showing her throat because she was just rejected from her dream art school/program. As the story progresses, though, she gets herself back together and starts to show a little backbone – especially in that one scene with the extras, it was awesome. Dee on her own is sort of dramatic, but it works? I think. I don’t really know. When reading, I wasn’t invested in Dee as an individual but more of as a piece in the story. One of her best qualities, beyond her utterly relatable her fangirling is, was her relationships with the people around her. She is one of those characters that you learn to love through watching her interact with other people, rather than internal qualities.

A key component in this adventure was Milo, AKA: Cliche central but still adorable and awesome. I guess it’s kind of hard to write a contemporary romance with a famous love interest that falls in love with a normal girl that doesn’t end up cliche? If any of you lovely people can point me in the direction of non-cliche famous people contemporaries, I’m all ears. But, anyways, back to Milo Ritter. Add together actor/Singer who is a teen pop sensation, asshole to cover up the pain, and a complete cinnamon roll underneath the hard exterior and you’ve got sexy-man-sensation Milo Ritter at your service. Okay, he’s not that bad, but still. I actually liked him, despite him playing the sympathy card being the only reason I really began to like him. He was a dick, but he had a reason for it? So, yay! (Please note sarcasm here).

I realize that probably came out sounding like I hated Milo, but I didn’t. He really wasn’t that bad, but he definitely had his moments. I think my problem is that his only character development came out of him trying to make Dee sympathetic. “Oh, I’m an asshole. Sorry, let me tell you about my cheating girlfriend.” – basically. He did have his good moments, too, especially towards the end. And, like I said in the beginning, this book is fluff galore, so I did actually like their relationship. Part of my issue with the romance was the cliche induced toothache paired with the speed dating-esque feel to it. It happened very quickly. Not a problem in itself, but I, as a reader, really wanted to see the relationship between Dee and Milo humanized, drawn out, and more fleshed out. My Unscripted Life needed a slow build in order to make an effective emotional impact, but it was still a darn good romance.

My Unscripted Life is a happy-go-lucky, feel good read. It puts a smile on your face that isn’t likely to fade anytime soon. It was cute, dramatic, and funny. It had some spunk to it, and it made all the difference.

2 thoughts on “My Unscripted Life”