Hey guys! I come to you today with something exciting. A little while ago I received an email asking if I would like to do an interview, and of course I said yes!

Deanna Cabinian is the author of One Night, which is now available for preorder. 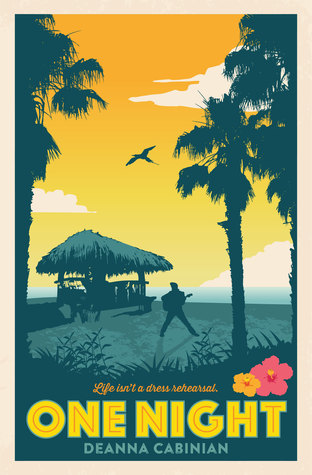 Thompson may be only seventeen but he knows he’s just checked into Heartbreak Hotel for good, now that his girlfriend, Caroline, has put an end to their burning love. Since then he’s been sleepwalking through his summer job at Super Kmart while desperately dreaming of ways to win her back. He even drops by the Tiki House on Elvis Presley Night hoping that she, a diehard fan of the “King of Rock ‘n’ Roll,” will be there as well. That’s when he meets Johnny Lee Young—real estate agent by day, Hawaii’s Favorite Elvis Impersonator by night—and the lovesick teen’s world suddenly takes a wild and unexpected turn.

As luck would have it, Johnny needs a temporary assistant to help with equipment and social media and Thompson eagerly accepts the offer, hoping it will distract him from his painful and lingering romantic issues. But like Thompson, Johnny is nursing a secret heartbreak and pining for his own lost love. So the new roadie starts making plans—with a little help from his friends Ronnie and Greta—to accompany the counterfeit King on an odyssey of a lifetime that will take them far from their island paradise home in search of true love.

1. What inspired you to start writing in the first place? Was it a teacher? A parent? A favorite story?
I think it’s just always been in me. I’ve always had this need to create and write. I did love this book when I was three called Alphabears that I loved so much I memorized it and I thought I knew how to read. All I know for sure is that there’s an illustrated kid’s book about a family of sea turtles in a box in my parent’s basement that I put together when I was five. I haven’t stopped writing since then!
2. What advice would you give to any aspiring writers?
My first piece of advice is: if writing is important to you, make time for it, even if it’s just 5 minutes a day or an hour a week. My second piece of advice is share your work with others and get feedback. It’s the only way to improve. Also, read as much as you can.
3. What was the most difficult part of writing One Night? What was your favorite part of writing One Night?
I think writing it was pretty easy; it was the editing that was tricky, lol. Trying to cobble together a cohesive, consistent, and entertaining story from a first draft is always the hardest thing.  My favorite part was getting to spend time with Thompson and Johnny, especially Thompson. He’s just so dramatic and a hopeless romantic and over-the-top at times. I still think about him like he’s a real person.
4. Who is your greatest inspiration?
I have a couple people to mention. My mother is the most intelligent and kindest person I have ever known. My dad is the hardest worker. He grew up in the Philippines and worked very hard to get to the United States and have a good life (*spoiler alert* my next novel is set in the Philippines which I’m super excited about!). I have to mention my husband, Milan, too. I had been writing for years and years and was kind of struggling with it, but then I met him and wrote One Night – I don’t think it’s an accident that I’ve done my best work since I met him. I always thought happiness would be a creativity killer, but it turns out that’s not the case!

DEANNA CABINIAN has worked in radio,
television, and magazine publishing, but her
greatest passion is writing. A graduate of
Northern Illinois University, she has a
bachelor’s degree in journalism and a Master’s
degree in sport management. She writes from
wherever she happens to be, but the majority
of her writing is done from Chicago.
When she isn’t writing she enjoys traveling and
spending time with her husband and family.