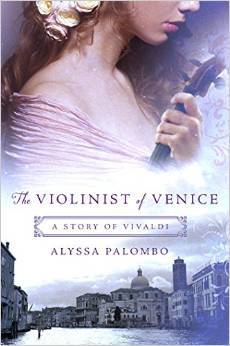 Title: The Violinist of Venice: A Story of Vivaldi

Like most 18th century Venetians, Adriana d’Amato adores music-except her strict merchant father has forbidden her to cultivate her gift for the violin. But she refuses to let that stop her from living her dreams and begins sneaking out of her family’s palazzo under the cover of night to take violin lessons from virtuoso violinist and composer Antonio Vivaldi. However, what begins as secret lessons swiftly evolves into a passionate, consuming love affair.

Adriana’s father is intent on seeing her married to a wealthy, prominent member of Venice’s patrician class-and a handsome, charming suitor, whom she knows she could love, only complicates matters-but Vivaldi is a priest, making their relationship forbidden in the eyes of the Church and of society. They both know their affair will end upon Adriana’s marriage, but she cannot anticipate the events that will force Vivaldi to choose between her and his music. The repercussions of his choice-and of Adriana’s own choices-will haunt both of their lives in ways they never imagined.

Spanning more than 30 years of Adriana’s life, Alyssa Palombo’s The Violinist of Venice is a story of passion, music, ambition, and finding the strength to both fall in love and to carry on when it ends.

So this is a little out of my normal sphere of reviews – but I decided to do it anyway. Let me tell you, I am so glad I said yes and took the time to read Violinist of Venice. Going into this, I had no idea who Vivaldi was, what he did, nada. I didn’t really know much about the time period other than what I could assume from the label of ‘eighteenth century’ – but The Violinist of Venice did one thing exceptionally well (actually, it did a lot of things well) and that was educate me on the time period and the circumstances of those involved. The Violinist of Venice is a breathtaking, lyrical, and stunning novel about a young woman named Adriana D’Amato and her love affair with the great composer Antonio Vivaldi – and yet, it is also so much more than a love story.

This book details one woman’s journey from abuse and fear into being a confident woman capable of doing what is necessary for her own happiness.
I did find this book a little difficult to get into at first, but over time, I found myself growing increasingly immersed in the story. The lyrical prose wove a strong connection, just as the description of music and love pulled me deeply within the sweeping narrative. While the beginning of the novel felt a little too rushed for my taste, the rest of the book was perfectly paced and it left me wanting more – it left me on the edge of my seat craving more from these characters and this setting even though I knew that the story was over. If that’s not skill, then I don’t know what is.
Speaking of the characters… oh my goodness, the scope of the character arc tackled throughout the course of this book seemed horribly daunting, and yet Palombo tackled it with poise and grace. Adriana’s transformation from beginning to end was awe-inspiring and the perfect example of how a character should be changed by the events in their life. She was naïve, innocent, and almost the stereotypical, somewhat annoying youngling that didn’t know their left foot from their right. Yet, at the end of the book, Adriana is a confident, strong woman who chooses forgiveness despite all of the wrongs committed. She finds the will to ignore society’s expectations and live the life she wants to life – it was inspiring, especially for a woman of that time.
I think my favorite part, though, aside from the character development, were the descriptions of playing music. Boy did that bring me back. I used to play the cello… and reading the way Palombo tackled the concerts and performances both brought back memories and made my fingers ache for the strings once again. I could hear the notes play through my head and I could imagine it was my own hands creating such beautiful sounds – it was incredible.
The Violinist of Venice is well worth sticking through the convoluted beginning. Not only is it a story of passion, strength, and determination, it is also a story of individuality and the power of your own voice against a larger society. This book is inspiring, it is humbling, and it – by far – is one of the best uses of history and music I have ever seen in literature. Overall, this spellbinding read is the prime example of why literature is beautiful and why I love to read it.

1. What made you decide to set your novel in 18th century Venice? How did that affect your writing process?
Since the original idea was about a relationship between Antonio Vivaldi and one of his students, it always had to be set in 18th century Venice, as that’s when and where he lived and worked. With that said, when the initial idea came to me, I knew hardly anything about Vivaldi or Venice, and ended up doing the research as I went, because I couldn’t not start writing right away. In the end the book took me a lot longer from draft one to a finished, polished draft because I needed to take time for research in the midst of things. A lot of elements and details in the early drafts needed to change based on things that I discovered while doing the research, but the overall arc of the story remained the same.

2. What advice would you give aspiring authors?
I think it goes without saying that you need to read A LOT. Read books in the genre you want to write in, but read books outside of that genre as well – doing so will ultimately make you more well-rounded as a writer.

Also, know that you’ll need to make a lot of time to write if you’re serious about being an author, but make that time however and whenever works best for you. Don’t feel like you need to write every day if that doesn’t work for you – I found that that doesn’t work for me, as if I’m working on something for a stretch of days in a row, after a while I start to get burned out and need a day or two away so I can come back to it fresh. So go about finding/making your writing time in whatever way makes you the most productive, and make that your routine.

3. How much research did you do prior to writing the book?
As I mentioned above, basically none! I was so excited about the initial idea that I started writing right away, because I couldn’t stop thinking about the story and just had to get it out. I did the research along the way. And once I had a full first draft, I knew specifically where the holes were that I had to fill with historical information, so that helped me to focus my research a bit. I don’t know that I recommend this method for researching and writing a historical novel, but it worked out for me in this instance!

4. Why did you include all of the technicalities about music? What do you think of the general response that it has gotten?
I’m a musician myself, so those musical technicalities are a language that I myself speak, and in writing about music and musicians it never occurred to me to not include those technical details, as that is how these characters would have spoken and thought about the music. That was the one aspect of the novel that I didn’t really have to research!

I realize that the technical musical jargon might be boring or off-putting for some readers who aren’t familiar with the terminology or aren’t as interested in that aspect of the story; I know that’s happened so far and will continue to happen, I’m sure. With that said, though, some people that have read it and are not musicians have really enjoyed the musical details anyway, so I think it’s like anything: it will resonate with some readers and not with others, and that’s fine. That’s the nature of fiction. I wrote a book that I myself would want to read, and as authors I think that’s all we can do.

5. Do you plan to venture out of the Historical Fiction realm for your next novel?
My next novel (for which I’m currently working on revisions with my editor at St. Martin’s) is also historical fiction, set in Renaissance Florence. I’ve also started drafting a new novel that I hope will be my third, which is again historical and is set in post-Revolutionary New York State. So I’ll definitely be sticking with historical fiction for a while and don’t think I would ever abandon it, but with that said I would also like to write novels with a contemporary setting at some point as well. I have a few ideas in that vein, and I have a contemporary adult fiction manuscript that I’ve been playing around with when not working on other things – I call it my “love affair project”  It does have quite a bit in common with Violinist in that it’s also about music and musicians, but this time the musicians are in a heavy metal band! Maybe someday the world will see that manuscript – at the moment I’m content to just see how everything goes!