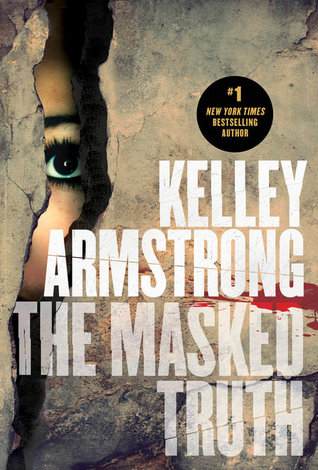 “I don’t want a free pass. I just want to pull myself together”

Source: Author signing at ALA Annual

Riley Vasquez is haunted by the brutal murder of the couple she was babysitting for.

Max Cross is suffering under the shadow of a life-altering diagnosis he doesn’t dare reveal.

The last thing either of them wants is to spend a weekend away at a therapy camp alongside five other teens with “issues.” But that’s exactly where they are when three masked men burst in to take the group hostage.

The building has no windows. The exits are sealed shut. Their phones are gone. And their captors are on a killing spree.

Riley and Max know that if they can’t get out, they’ll be next—but they’re about to discover that even escape doesn’t equal freedom.

AHHHHHH! Okay, fangirling over. Well, not really. I absolutely love Kelley Armstrong. I am a lover of all things Otherworld, Darkest Powers, and Darkest Rising. I love the television show they made out of Bitten. I just love, love, love, love all of her work! See, fangirling not over. When I found out that Kelley Armstrong was going to be at ALA, I freaked. She was at the top of my list of people to meet and I was the first in line. So, I waited patiently while internally screaming and then she showed up. It was like some sort of dream, let me tell you. So, she signed copies of her book for us to have as well as books you had brought – sadly, I didn’t bring my copies of the Otherworld series (shame on me). I had no idea what The Masked Truth was about, zip, nada. But, being the insane fangirl that I am, I went for it anyways simply because of the queen who wrote it. And boy, am I glad I did.

The Masked Truth is one crazy thrill ride that will make you question everything you know while also scaring you for life. It is heart pounding, cling to the edge of your seat terror. I know what you’re thinking: this can’t possibly be terrifying because it is a Young Adult novel. Well, you’re wrong. You are so, so wrong. The Masked Truth is about a group of kids at an overnight therapy camp who are taken hostage and have to fight in order to survive when their kidnappers go on a killing spree. Like I said terrifying.
When the book starts, everything is already going to hell. Riley, our protagonist, is basically forced into babysitting by her “friend”. While she is there, and before the parents even leave, a group of men break into the house and kill the parents. Riley hides under the bed with the daughter and the two of them live. Hence the reason Riley is at this therapy camp. This scene alone was heartbreaking. I could feel Riley’s terror, her desire to protect Darla (the daughter), and her fear that she wasn’t doing the right thing by hiding beneath the bed. Riley is dealing with some severe PTSD as the story moves on – and the way Armstrong handles it is pure brilliance. Armstrong could have easily turned Riley into a simpering, delicate flower that we sympathize with because of what she witnessed – but no. Riley is strong, she is smart, she is stubborn, and she is a survivor who isn’t afraid to fight to save her friends. I really admire Riley, I love the way she is willing to protect other people but she also knows when she can only protect herself. She isn’t stupid – and it shows. She is the one who talks her fellow hostages through a hostage negotiation, what they can expect and what not. She is the one that comes up with the plan to escape, the plan for barricading doors, the one who knows how to disarm or un-jam a gun. I loved her. The best part, though? She isn’t perfect. She has horrible flashbacks, panic attacks, and hallucinations during everything that is going on – of course being held hostage is going to be a serious trigger for her. It made her real, understandable, and easy to believe in. I wanted her to escape – and that made reading this book all the more frightening.
We also have Max, and I adore him. Max isn’t your typical love interest – not in the slightest. He is schizophrenic. Boy, reading the chapters from his point of view was a serious mind fuck. I really liked him. When we first meet Max, you think he is just the normal YA love interest with a bad attitude and cool accent – wrong. The more you read this book, the more Armstrong delves into his character and peels back the layers. It is truly beautiful. Kelley also uses him to examine certain stereotypes about mental illness – schizophrenia in particular. I won’t delve into this too much because doing so is sort of spoiler for what happens, but I will say that Armstrong took a very controversial topic and handled it with grace.
When I said this book was terrifying, I didn’t mean the stupid ghouls, pop outs, or paranormal type of terror – I meant that this book is petrifying because it is perfectly plausible and could happen to any of us. I’m going to throw in a personal note here to explain what I mean. When I’m at home, I work in a medical complex that shares the building with a bank. The bank is on the first floor and the rest of the building belongs to the medical group. Last summer while I was working, the bank was robbed. I don’t know all of the details of what happened or who it was, only the police do, but I do remember the terror of wondering where the bad guys went. What if they escaped through the employee stairwell? I was only on the second floor at the time, it was a perfectly plausible option. Luckily, I never saw the men in person – but I did see the getaway car speeding down the road from the parking structure. So, yea, men with guns barging in wherever you are is perfectly likely to happen – no matter how much you disagree. Especially with all the school shootings going on right now.
Whoops, sorry about my little rant-ish thing up there (not really). Back to our regularly scheduled programming folks. Anyways, like I said, this book is scary. The thriller aspect of the novel, which is really the main theme of the whole thing, is on point. Nothing is out of place, nothing is predictable, and nothing is unnecessary. Every little detail matters, even the ones you don’t want to pay attention to.
I really don’t know what else to say about this book other than the fact that it is the perfect October read to keep you up late at night. The Masked Truth is exactly what a thriller should be. The end.

2 thoughts on “The Masked Truth”