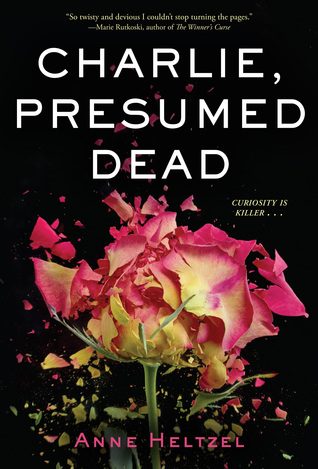 “People aren’t born bad; they become that way. It happens through a series of bad decisions… missteps over time.”

In Paris, family and friends gather to mourn the tragic passing of Charlie Price—young, handsome, charming, a world-traveler—who is presumed dead after an explosion. Authorities find only a bloodied jacket, ID’d as Charlie’s. At the funeral, two teens who are perfect strangers, Lena Whitney and Aubrey Boroughs, make another shocking discovery: they have both been dating Charlie, both think Charlie loved them and them alone, and there is a lot they didn’t know about their boyfriend. Over the next week, a mind-bending trip unfolds: first in London—then in Mumbai, Kerala, and Bangkok, the girls go in search of Charlie. Is he still alive? What did their love for him even mean? The truth is out there, but soon it becomes clear that the girls are harboring secrets of their own.

No one knows whom to trust in this thrilling tale of suspense and deception.

Before Charlie’s funeral in Paris, Lena and Aubrey don’t know each other. They don’t know that Charlie has been dating both of them at the same time. They are strangers. That all changes the moment they meet each other at Charlie’s funeral. Charlie Presumed Dead is a young adult suspense thriller that takes you on a road trip all over the world to figure out whether or not Charlie is truly dead. I did not enjoy this book, but I desperately wanted to. It sounded interesting, I loved the cover, and the first chapter sucked me in – but it went downhill from there.

The book is told through varying points of view. It is mostly Lena and Aubrey, but there are a couple scatterings of Charlie and memories thrown in for good measure. I know that may seen like a lot to keep track of, but it was surprisingly easy – possibly even more welcome than the actual point of views. I didn’t have problem with the way it was written, sort of. I thought it served its purpose well enough, but it didn’t really help in the long run. I ended up dreading the next switch after a time, both Lena and Aubrey had too many secrets that they internally hinted at and it just got old very quickly. The secrets themselves held no real value to the story and the constant reminder of them only ended up annoying me. Also, the characters seem to swap personalities between chapters. One chapter Lena is a tough-fearless girl and next she is the complete opposite. It happens so many times that I slowly lost track of who was who and I had to double check what chapter I was reading. I know it is easy to understand why they wouldn’t be like themselves in their situation, but I don’t think they should have been able change their true personalities that easily. I still understand it, though. But, that doesn’t mean that I began to enjoy the book. What I had hoped would be a psychological thriller was a bellow average, contemporary trying too hard to be something it wasn’t.

For most of the story, I hated Aubrey and Lena. I will say this, though, I loved that they tried not to blame each other for the fact that Charlie was dating him both, they each blamed him instead. I can’t really explain why I didn’t like either protagonist beyond the fact that they annoyed me. I understand their motives and the way they acted, but both of them still reminded me more of whining little girls trying to desperately be detectives than anything else. The girls bonded instantly for the most part, and I was okay with that, but despite their bond they both distrusted each other to a degree that made me want to rip my hair out. They both wanted answers, they both wanted the truth that neither of them had any part in – so why couldn’t they just get along like normal people and be done with it? I just finished watching The Other Woman a couple of nights ago, and I have to say that the movie did so much more for me than this book ever could – and they’re not even supposed to be related.

I don’t really have much else to say about the book without tearing the rest of it to pieces. I did not like it, and therefore my opinion is extremely biased. I would recommend trying the book if you are a fan of psychological thrillers, you might enjoy it or think it was better than I did. I had a really hard time seeing around the shallowness of the characters, the lack believability of their sudden relationship with each other, and the completely open ending. Since this book holds so many f-bombs and other unmentionables, I would rate this on the cusp of being a New Adult book rather than one for Young Adults. That means I would say it is meant for people seventeen an older, at least in my opinion. I know this is a rather lack luster review, but I just couldn’t get myself to feel anything other than indifference about this book.