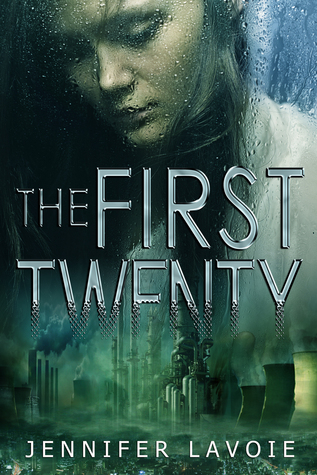 “There’s no future without trust in a world where you can’t survive on your own.”

Humanity was nearly wiped out when a series of global disasters struck, but pockets of survivors have managed to thrive and are starting to rebuild society. Peyton lives with others in what used to be a factory. When her adopted father is murdered by Scavengers, she is determined to bring justice to those who took him away from her. She didn’t count on meeting Nixie.

Nixie is one of the few people born with the ability to dowse for water with her body. In a world where safe water is hard to come by, she’s a valuable tool to her people. When she’s taken by Peyton, they’ll do anything to get her back. As the tension between the groups reaches critical max, Peyton is forced to make a decision: give up the girl she’s learned to love, or risk the lives of those she’s responsible for.

At the start of this book, it has been twenty years since the world “fell apart”. For one of the two main characters, Peyton, the time “Before” is something she has never experienced – only learned about from stories. Freshly eighteen, she becomes the leader of The Mill, her home. The Mill is home to a group called the Settlers, which Peyton’s father was in charge of before his death.

The other main character is Nixie, a tiny female who belongs to the group called The Scavengers. The Scavenger, unlike the Settlers, move from place to place and are not afraid to do whatever it takes to get the supplies they need to survive: lie, steal, kill. Everything is fair game. Nixie has a special gift, though, which makes her invaluable to her people. She is a dowser, someone who can sense and find water with her body.

The world we step into is one full of hatred, hard work, and suffering. There is a drought, the water is running low for all parties which begins to make life increasingly difficult and cause tensions to rise higher within the groups. Our two main characters meet for the first time in a desperate raid upon the Mill, Nixie’s group is after a water purification system and Peyton is trying to defend it. Low and behold, Nixie gets captured and the story really begins.

I loved this story and I hated it at the same time. In all honesty, I don’t know which emotion takes precedence. I have a certain soft spot for Dystopian novels, and on that factor this book did not disappoint – but there were also some big issues I had with the plot. Usually, I wouldn’t mind if there was no explanation as to why the world has become such a wasteland – but throughout The First Twenty, there is no explanation of anything. It is simply actions, consequences (more often poorly executed ones), and more description of the two main characters than anything else. There is no background. We are thrust into this decaying world, and not even those from the Before say anything about what happened. Was it a nuclear war? Did the government collapse? There were too many open ends that left for misunderstandings. This Before couldn’t have been that long ago, there are still plenty of people alive who remember what it was like and even still follow through with the same practices like using last names. If it was so recent, why don’t we know anything about it?

The second problem I had was the two main characters. It’s not that I didn’t like them, I really enjoyed their personalities, I just hate them together. As soon as Peyton sees Nixie for the first time, she instantly has thoughts of how beautiful the other girl is. Their entire relationship felt forced, it went from Peyton hating Nixie because of what she was to suddenly the two of them kissing and craving being in each other’s arms. Nixie constantly describes Peyton’s beauty, and visa versa. There was no natural chemistry between the two of them, and for that reason – despite how much I love the idea of pushing the boundaries with the two girls falling in love – I couldn’t enjoy their relationship. I felt no burning need for them to win and be together in the end, in fact, I sort of enjoyed it when Peyton momentarily hated Nixie again for, like, two pages.

The last issue I had was the length. The book started off at a wonderful pace and actually kept it for most of the book, but at the end, the final conflict and conclusion came about in around a total of thirty or so pages. It was way too condensed and completely rushed. There was a sudden problem, and then it was over almost as quickly as it had started. Peyton forgave Nixie almost instantly, as well as another Scavenger, it was almost sickening to read. Where are the consequences? Where was the distrust that would happen in any real relationship? Especially in that sort of society, you would think it would take even longer to get over someone lying to you like that.

Besides these things, I did actually enjoy the novel. I absolutely love the cover, I found it to be beautiful and intriguing – though I have no idea who is actually on it. Both of the main characters are blonde. Overall, it was not a bad read. Yes, there are some issues that I believe should be fixed – but otherwise, I really liked it. The premise behind the novel was amazing, I love the idea of a dystopian world where it isn’t actually all futuristic. This world is in the future, but the people still survive using the basic methods – I really enjoyed that aspect of reality. One of my other favorite parts was Graham, he was my favorite character simply because of his kindness. I feel that in a world like that, people like him are rare, therefore I found myself loving him even more. He isn’t even a main character, but he was still my favorite.

The First Twenty by Jennifer Lavoie is a fun, very fast read perfect for fans of Divergent and Uglies. I believe that this will be a trilogy, though I am not exactly sure – but I still cannot wait to see what happens next. I would recommend this for ages fourteen and up due to the mild sexuality and the amount of violence. I would also advise you to avoid this book if same-sex relationships make you uncomfortable, there are three of them present in this story.