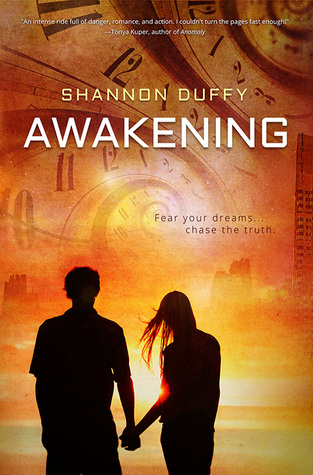 “Everyone has to die at some point, so the thought of passing on together while holding hands with my one true love has always sounded like an amazing fairy tale. It reminds me of the old Shakespearean play Romeo and Juliet, and of the powerful love they shared.”

Series: Standalone (at least right now it is)

Desiree Six (because she was born on a Friday) believes in everything the Protectorate stands for. She likes the safety and security of having her entire life planned out—her career, her mate, even the date of her death. She doesn’t even think to question when Darian, her childhood friend and neighbor, is convicted of murdering his parents. They had seemed like such a loving family. But if he was convicted, then he must have done it.

Then Darian shows up in her room late one night. He has escaped from the Terrorscape—a nightmare machine used to punish all Noncompliants—and needs Desiree’s help. What he tells her rocks her world to its core and makes her doubt everything she’s ever been told. With this new information, will Desiree and Darian be able to escape the Protectorate before it’s too late?

Awakening is a Young Adult novel, and since it is dystopian it will inevitably be compared to The Hunger Games, but that isn’t necessarily a bad thing. A lot of publicity can come from comparing one book to another, and in my opinion, this book deserves all the attention it can get. It was wonderful, it took me slightly longer to read than I had originally planned because of schoolwork – but it took all of my will power not to just power through it and forget everything else. It kept me on the edge of my seat, dragged me around by my ankles and refused to let go. I cannot wait for the next installment of this series, and if the first book is any indication, Shannon Duffy is an author to watch out for.

Although I am really glad that I was given the opportunity to read this book, with the popularity of the dystopian genre – it doesn’t surprise me that I would read the same story more than once. In this case, this book felt like a replica of Matched by Allie Condie. I will get into why later. Though once again, this is not necessarily a bad thing – but it had too many obvious similarities to be completely original, at least in my view. I still loved the book, don’t get me wrong, but as soon as I caught onto the parallels, it was impossible to ignore.

Let’s start with the world, which I found completely and utterly fascinating. The disaster of this book was called the Manic Age, and from what we are told of it, it must have been horrible – but really, it just sounds like the world we live in today with a little more embellishing. Of course, because it is dystopian, one big institution comes and fixes everything. This time, it is called The Protectorate instead of The Capitol. It is said that the Manic Age was around thirty-eight years ago, at least according to the Protectorate – so you would think that people remembered what it was like, right? No. In this world, the Protectorate has created a numbering system and one child policy. I actually enjoyed this aspect of the world, I found it very intriguing that the date of one’s death was decided on the date of their birth. This numbered law enables the Protectorate to manage the population and keep track of its citizens, everyone has a set day to meet their life mate, become bonded (married) to them, enter a field of work chosen for them, and die. All of this is determined by their birth date. The number system is based off of the days of the week, Ones are born on Sunday and Sevens are born on Saturdays. Ones have the shortest lift span, they have to turn themselves in for termination at the age of twenty-five, Sevens don’t have to do so until they are fifty-five. The number of the day you are born also becomes their middle name, and determines who they will be bonded with. The Protectorate has also created this thing called the Dreamscape, and the citizens of Tower cannot sleep without being attached to this machine. There is another form of this machine, called the Terrorscape, that they use to punish criminals and Noncompliants. One thing I absolutely loved was the Terrorscape, especially the second one with the clowns. Now, anyone who knows me knows that I am absolutely terrified of clowns because of watching It when I was little. I just found the whole idea of the Terrorscape intriguing. For the first five minutes, you’re strapped to a gurney and forced to just watch nightmares play out around you – but after that, the Terrorscape becomes interactive, sort of like Divergent’s Fear Landscapes.
Now, onto the similarities between this book and Matched. In Matched, the citizens are told what job they will be doing for the rest of their lives and are expected to comply to orders – it is identical in this book. Tower citizens receive a letter on their fifth birthday telling them what they will become when they grow up, and the soon enter specialized education programs for so called profession. There is also the aspect of the forced marriages. On their fifteenth birthday, Tower citizens are gifted with dreams of their bond mates through the Dreamscape that the Protectorate so kindly offers them. Then, on their sixteenth birthday, there is a pre-binding ceremony where they exchange promise bracelets with their betrothed. The similarities lie not only here in the forced matches, but also in the layout of how the bondings take place. After finding out who their betrothed is and promising themselves to them, they go on a series of monitored group dates until the actual bonding ceremony. Both of these ceremonies are completely formal events, and the lead up to each eerily similar.
Now, as for the story itself. It was wonderful and completely expected. Compliant girl, Desiree Six, has a Noncompliant childhood friend who was convicted of murder. Of course, she believes everything the Protectorate feeds her until one night after finding out her bond mate is her childhood bully, the friend shows up in her room begging for help. I’m sure you all see where this is going. She becomes enlightened, or “Awakened”, and starts fighting back against the all mighty and oppressive Protectorate while simultaneously having a forbidden love affair with convict BFF. There is a lot more to the story than that, and I feel as if my words are probably coming across way too sarcastically, so I would really recommend reading it. Despite my small problem with the book, everything else was absolutely wonderful.

Awakening by Shannon Duffy is a fast, heart pounding read about a world where your death is determined by the date of your birth and every aspect of your life is chosen before you even open your eyes. I loved this book, the fast pace and nonstop action towards the end left my heart ready to burst out of my chest. I would recommend this to anyone looking for a good dystopian novel, or for fans of The Hunger Games, Matched, and Divergent. I would say this is mostly for ages fourteen and up due to the graphic Terrorscapes (which scared the crap out of me) and other mature content. I can’t wait to devour the next book and see where Desiree and Darian go next.