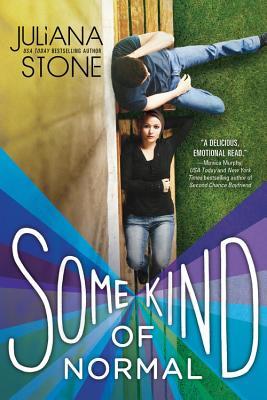 Title: Some Kind of Normal

Publication: May 5, 2015 by Sourcebooks Fire

For Trevor normal was fast guitar licks, catching game-winning passes and partying all night. Until a car accident leaves Trevor with no band, no teammates and no chance of graduating. It’s kinda hard to ace your finals when you’ve been in a coma. The last thing he needs is stuck-up Everly Jenkins as his new tutor—those beautiful blue eyes catching every last flaw.

For Everly normal was a perfect family around the dinner table, playing piano at Sunday service and sunning by the pool. Until she discovers her whole life is a lie. Now the perfect pastor’s daughter is hiding a life-changing secret, one that is slowly tearing her family apart. And spending the summer with notorious flirt Trevor Lewis means her darkest secret could be exposed.

I’d like to start off by saying how much I adored this book. I didn’t think I would, I was thrown off by the tendency of the voice to switch from past to present, as well as the shifting point of views. It was not bad though, in fact, it sort of elevated the story. After I got used to the writing and the characters distinct voices, I found myself falling in love with Some Kind of Normal. To describe how I felt reading this book, I want to use a quote from The Fault in Our Stars. I fell in love with this book the same way Hazel fell in love with Augustus: “slowly, and then all at once.”

It did take me a while before I became invested in the characters and what was actually going on, I spent far too long simmering with annoyance due to the stereotypical characters, their situations, and the insta-love. One of my biggest pet peeves of the book was Everly, she made fun of her friend for falling instantly in love with Link, and yet she did the exact same thing herself with Trevor. I did like everything else, though. I loved how the issue with Everly’s father was not what I expected it to be, I loved her mom’s sudden flip, and I loved how she was not the girl I perceived her to be at the beginning of the novel.

This book is narrated in two main points of view, Everly and Trevor. It starts off with Trevor and then flips to Everly, but both of them are basically lamenting the exact same problem. Neither of them are who they were before because of something “drastic”. I understand Trevor’s problem with his anger after the accident more than I understood Everly. The point of view switching actually sort of helped me cope with the parts I didn’t like quite as much as others. Seeing Everyly through Trevor’s eyes, and visa-versa, made for a much more compelling story. Since we were not confined to one train of thought, when one of the two characters acted out in such a way to make the other hate them, we often were given an explanation shortly thereafter from that characters internal monologue. The best part of this, in my opinion, was being able to fall in love with both of them. You sort of hate Trevor when you are in his head, and I sort of hated Everly when in hers, but when they look at each other it becomes easier to see the things that they do not see within themselves. One of my favorite scenes in this book is when Everly asks Trevor what he sees in her and he responds “I see you.” It was beautiful, cheesy and predictable, but beautiful.

That is sort of how I see the whole book, really. It was a predictable and wonderfully cheesy story up until the end. I was pleasantly surprised by how Everly didn’t automatically give forgiveness, and I applaud her for that. Overall, Some Kind of Normal was a spectacular read for those who are craving some simple romance. There are a lot of mature themes throughout, especially when reading from Trevor’s point of view. In his own defense, he even laughs at himself for just being a seventeen year old male. Because of the overlapping themes of sex and drugs, I would recommend this book for ages fifteen and up.