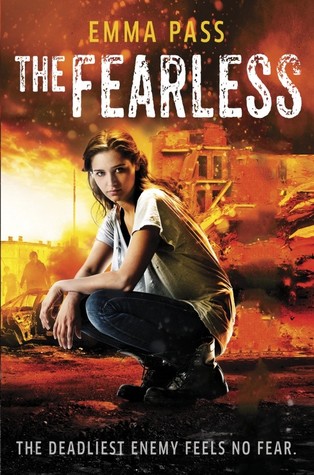 For fans of The Hunger Games, Matched, Divergent, and The Fifth Wave, this fast-paced futuristic thriller tells the story of seventeen-year-old Cass and her fight to protect her younger brother from an unimaginably terrifying enemy.

The Deadliest Enemy feels no fear.

When the Fearless invaded, they injected everyone in their path with the same serum that stripped them of humanity.

Cass has the invasion seared in her memory. Seven years later, she and her brother, Jori, are living on Hope Island in a community of survivors. No one can enter, and no one can leave.

It’s the only way to stay safe.

Dystopian novels are some of my favorite types of books. Books such as The Hunger Games, Divergent, and The Fifth Wave, as well as The Maze Runner, are all dystopian themed stories. The Fearless, written by Emma Pass, is one of those stories. I love dystopian books, there is something incredibly fascinating about a world where we are no longer in control. Usually, it is the government that is corrupt and the cause of the problems within the novel, like the Capitol in The Hunger Games and Jeanine in Divergent. Here, though, the government is not actually the bad guy.

The Fearless is about a virus, in a way. It was created by a group of scientists looking to eradicate the effects of PTSD in soldiers while they were still in combat situations. As usual, it started off innocent enough – but it soon got out of control. Not only did this “vaccine” take away all types of fear, it made the soldiers completely emotionless, prone to extreme flashes of violence and rage, stronger, faster, and able to see in the dark. We learn that those who have become fearless are marked by milky, silver eyes and decaying flesh. The virus starts to eat them from the inside out. The serum is also highly addictive, which causes frequent usage among the fearless, therefore causing an even faster rotting process. The fearless are not zombies, at least not in the true sense of the word – but they are close enough. Once someone has been given the serum, they become extremely violent and feel the uncontrollable need to make more just like them. The thing is, despite these urges, they can still think and function like normal people for a little while. Add this to their speed and strength and it makes them extremely dangerous.

The book starts off when the main character, Cassie, is ten years old. It is the night of the invasion. One of the things that I love the most about this book is that it starts right in the middle of the action, ten year old Cassie knows that something is going on around the world – but her parents know all the details about it. The book takes place in the United Kingdom, something it took me a while to figure out. They are the last to become overrun by the fearless, and therefore we get to see the very beginning of the invasion there through Cassie’s eyes. It was sort of traumatizing to read, really – but I loved every second of it. Mind you, this is only the first chapter.

The real story picks up a couple years later when her younger brother, Jori, is kidnapped by the fearless right out of their safe haven called Hope Island. Cassie, who now goes by Cass, breaks the number one rule of Hope Island to go after her brother. The laws of Hope state that if anyone is kidnapped by the fearless, they are considered dead unless they return on their own volition and unaltered. Cass, of course, goes after her brother with the help of who I immediately deemed the lover interest. His name is Myo, and he is wonderful.

I love the fact that this book is told from three points of view, Cass, Myo, and Sol. Sol is Cassie’s childhood friend, his father is the one that created Hope Island. I also really liked the fact that romance was not the central plot of this book. Don’t get me wrong, I love romance in books, but it would have hindered the story here. It is still there, it just isn’t the main plot. The whole point of the book is Cassie and Myo teaming up to rescue their respective siblings. Of course, attraction blooms along the way – but it takes forever for it to boil over into anything significant.

Overall, this was a wonderful book. It is packed full of action, adventure, and everything else that you could possibly want. It was a fast read for me, it sucked me in and didn’t let me go until I reached the end. I can’t wait for the rest of the series, I’m really excited to see where Cass and Myo go next. Also, I absolutely love anything to do with zombies, the scary-brain-eating-infection-epidemic kind, not Warm Bodies. I would recommend it to anyone looking for a little bit of action or a good thrill, also, if you just love Dystopian books as much as I do. I would leave this book for ages fourteen and older due to the graphic violence.

But when Hope Island’s security is breeched and Jori is taken by the Fearless, Cass will risk everything to get him back.