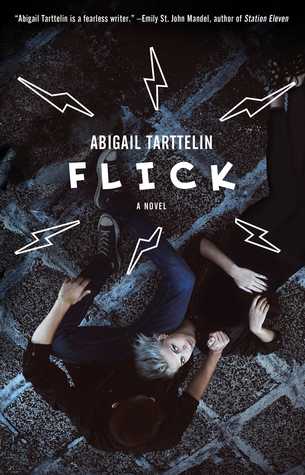 My name is Flick and these are my images of my disconnected life, my forgettable weeks and unforgettable weekends. I am one of the disaffected youth.

Marooned by a lack of education (and lack of anything better to do), Will Flicker, a.k.a. “Flick,” spends most days pondering the artistry behind being a stoner, whether Pepsi is better than Coke, and how best to get clear of his tiny, one-horse suburb. But Flick senses there’s something else out there waiting for him, and the sign comes in the form of the new girl in town—a confident, unconventionally beautiful girl named Rainbow. As their relationship develops, Flick finds himself torn between the twisted loyalty he feels to his old life and the pull of freedom that Rainbow represents.

The story unfolds in a small factory town in northern England, where bleak and sometimes treacherous circumstances make the taste of a love affair even sweeter. Told with humor and raw honesty, in a voice “both authentic and compelling” (GQ, UK), Flick captures an unforgettable moment in the life of a young man on the verge.

Flick by Abigail Tarttelin is described as a “a modern-day Romeo and Juliet about sex, love, and growing up”, but instead I found it to be rather dull and one dimensional. I had a really hard time understanding half of what was happening, both because of the heavy use of slang and the fact that the main character was completely high or wasted most of the time. I was really excited to start this book, I thought it sounded interesting – but after the first few pages I found myself becoming increasingly uninterested and bored. I don’t usually have that problem with books, even if I find myself not liking it right away I give it a chance to get better – but for me, Flick never did. Now, you all know I hate bad reviews. Bad reviews suck, and sometimes it hurts to read them, but I promised to be honest so honest is what I shall be.

For starters, the synopsis claims that the main character Flick was drawn into his hard life of drugs and left with nothing else but that because of a lack of education. This I found to be false. When reading the book, it becomes apparent that Flick is actually doing quite well in school. He goes to class, he gets decent if not good grades, and he has this strange ability to go off on tangents that are scarily well thought out but also meaningless. He isn’t stupid, and he is not uneducated – he choose the life he is living and he even condemns his brother for doing well and living his own life. In my opinion, Flick just came off as uncaring, unemotional, and sort of dead. He didn’t seem to feel anything for anyone except for the new girl Rainbow, but even that felt stiff and was hard to read. Now, I don’t think this is the fault of Tarttelin’s writing – it was actually quite good despite my constant need to ask about the slang involved. This book was not originally published in the United States, so I understand that – but it still made it difficult. No, I think the stiffness was a product of a poorly thought out plot that basically was a short road to nowhere important. It had a brilliant idea, but it was badly executed. There wasn’t enough depth to the characters for me to care about them in the slightest. The main character, Flick, is a cocky asshole. We barely get a glimpse of Rainbow’s personality to even be able to begin to understand Flick’s obsession with her. We don’t even really get to know Flick all that well, his plans for the future don’t quite match up with his personality or his current view of life.

I don’t really have much else to say, I did like Rainbow’s character and that was it. Overall, this was a disappointing story marketed towards Young Adults even though it is nothing close to a Young Adult book. It is far too mature in its language and the context, if I had a child of my own I would never let them read this (but, alas, I am single and far too young).  It was worse than watching Game of Thrones or something when it came to the cussing and depiction of sex, there was also explicit drug usage. I know teens do that sort of stuff, but this book was so over the top I stopped believing it after chapter two. While I absolutely respect the idea of the message in Flick and I really did enjoy the style in which Tarttelin writes, this just was not a strong enough story for me. I’m not so turned off that I won’t look at other titles from her, but Flick won’t be hitting my favorites bookshelf either.